I wish I had posted more frequently here. While there wasn't much going on, there was 'stuff' worth noting. So again, I need to catch up a bit.

I was expecting the next step to be my first mammogram since my diagnosis, scheduled for March 26th. But in the weeks leading up to it, I realized that my left breast was hot, especially compared to my right. So I called my ObGyn, who suggested I call my surgeon. After an office visit, I was put on antibiotics. We both agreed I seemed to have something like mastitis, some sort of infection. I had also had a fever, but had come down with a cold at that time. So there really weren't too many other symptoms.

Two weeks of erythromycin didn't change anything. A different antiobiotic for a shorter duration was prescribed. I had already moved up my mammogram once, which made necessary the rescheduling of my April 4 appointment with my radiation oncologist. So I kept the new April 6 diagnostic mammogram, and was scheduled to see my radiation oncologist on May 2. I was in the midst of the second round of antibiotics when I had my mammogram. Read by a radiologist while I was there, I was informed that it looked fine, and that if there was some sort of infection, it wouldn't show up on the mammogram. It was suggested that I follow up those concerns with one of my doctors and left at that.

I decided that instead of continuing with the surgeon that I would wait until my appointment with my radiation oncologist, Dr. H. My surgeon had told me that radiation can sometimes result in mastitis, so I thought I could look into this possibility further when I met with Dr. H.

I was reassured with Dr. H's explanation of healing, which can take up to a year. As when the tip of my finger can feel hot when I have a cut there, so does my left breast, occasionally. It is still healing. I have no other symptoms. Dr. H assured me that I have no infection.

I will see him in 6 months, at which time we'll decide if I should have a mammogram at that point, or wait for a year. In a recent study that Dr. H had been involved in, 87 patients with my type of bc, who had been advised to have mammograms in 6 months, saw no change at that time and no difference in the first 6 month mammogram, and the subsequent 6 month one. While I have a letter that states I should have a mammogram in 6 months (from the radiologist), so legally, that is what I should be doing, I'm comfortable making that decision after my next appointment with Dr. H.

So, back to the hot flashes. The hot flashes. They've become worse in the last month, waking me more frequently at night. I sleep on a towel, with another on my pillow. Intense enough to wake me several times a night, I go back and forth between flipping off the covers, laying spread eagle atop them, and once I've 'dried off' huddling back under the covers, chilled. Back and forth.

Daytime is similar. No turtlenecks this winter. Not even long sleeved shirts most of the time. Layers, baby, layers! Tank tops or short sleeve tees, under a light sweater. That sweater is off, then on, then off again, then on. The biggest problem during the day is that I get wet and chilled more easily than at night. Marc, the kids, and close friends just smile and nod, and if they're too close, move away til it passes. Cuz I'm hot to the touch. Hot to be around. Impossible to cuddle until it passes!

When I saw my medical oncologist, Dr. N, in January, she gave me a prescription for an antidepressant. Apparently, an unanticipated side effect of some antidepressants is that they temper the severity of hot flashes. Might mean a peaceful night's sleep, something I haven't had in several months! But when I told Marc, he thought adding another drug to the mix was unwise. I now take synthroid and tamoxifen upon waking. The antidepressant would be taken at night. Every night.

So for now, the bottle of antidepressants sits untouched. When I wake and ruffle the covers or rise to dry myself or grab an extra blanket, Marc rolls over and goes back to sleep. Sometimes, he continues snoring, seemingly unaware. I think he's become accustomed to my increased tossing and turning and is able to stay sleeping.

Wish I could. Stay sleeping that is! I rarely wake in the morning feeling well rested, and have found myself to be less productive in the evenings. I'm often dozing off before the kids are in bed. Frequently, I wake after 10, temporarily rested, and can't fall back asleep for an hour or two. I'm now realizing that I need to make the most of that time and take care of some chore, or perhaps update my blog during that time.

The combination of those soggy nights and ever changing hair length has also made for some interesting bed head looks in the morning. No more running out to the bus stop without a peek in the mirror first. Some adjustment is usually required. I'll try a bit of water and fluffing up the flat spots to even out the look. Most of the time that works, but sometimes, it just makes my hair wild, giving it a life of its own. Last week I had one of those mornings, and I'm sure my flyaway 'do' was the reason for the strange looks and stares from the windows of Gaby's bus last week.

But most days, after washing, it doesn't look too bad. Curlier than it's ever been, it is indeed easy, even though any kind of style is somewhat limited! 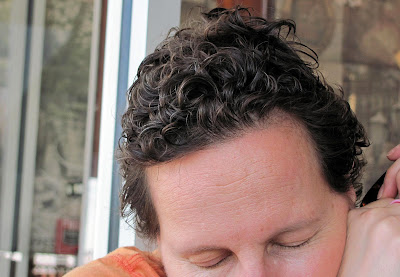 My curls, last Saturday. Darker than I was wearing it, this is my own colour. And the bits of grey are so evenly distributed that they're not really noticeable. At first, my hair reminded me of my Mom's, the look she achieves with regular perms and styling. Lately, the wave in the front remind me more of my Dad's hair. The length too!
All a part of the process of recovery, healing, and moving on.
Posted by Sherri P eh at 3:51 AM